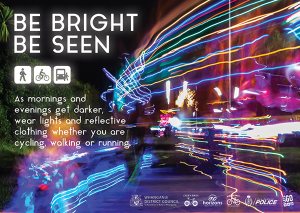 Five hundred sets of lights will be handed out to Whanganui cyclists, runners and walkers as part of a Be Bright, Be Seen campaign launched this week.

The winter campaign is a partnership between Whanganui District Council, Horizons Regional Council, Whanganui Police, Let’s Go and bike groups to ensure those out and about during the season’s darker mornings and evenings are more visible to other road users.

“We hope to educate not only cyclists on the road, but pedestrians and runners using shared pathways and footpaths.”

Be Bright, Be Seen follows the Whanganui District Council’s successful Light Up Bike Spectacle held in Whanganui in early May, with around 500 people donning lights and glow sticks for a night parade along the shared pathways.

“We’re pleased with the Light Up Bike Spectacle’s community support and we hope that’s repeated for this campaign, “ Mr Gruebsch says.

“I also appreciate those who have become involved with Be Bright, Be Seen including David Johnston, of the Whanganui Camera Club, who provided an outstanding image from the Light Up Bike Spectacle.”

Sarjeant Craig Yorston says Whanganui Police are proud to be working with other partner agencies to collectively improve the safety of people on our roads and shared cycle/walkways.

“This partnership initiative is an opportunity to prevent harm because, ultimately, New Zealand Police want everyone to be safe and feel safe.”

Horizons Regional Council road safety co-ordinator Glenda Leitao is also supportive as Be Bright, Be Seen will ensure cyclists are visible to other road users, especially early in the morning and later in the evening.

“Whanganui has a cycling community that not only cycles to work and school but also cycles for pleasure and exercise and this campaign will promote their visibility when cycling.”

Police and the Let’s Go team will also hand out free lights and flyers to those who need to be more visible on Whanganui’s roads and footpaths. Keep an eye out for the colourful posters around town and in Whanganui libraries, too. The campaign ends on Friday, 20 July 2018. 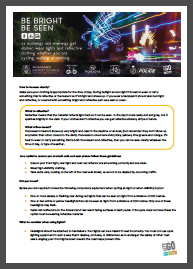